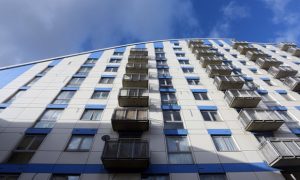 Steve’s been at the forefront of the campaign to ban flammable cladding after it led to a tragic fire at Grenfell Tower that killed 82 people.

Following the Grenfell tragedy, checks were carried out on other housing blocks across the country to see if they were safe.  Citiscape, a large residential block in Croydon, was found to have exactly the same kind of cladding as Grenfell Tower.  Alarmed residents contacted their managing agent to have the building made safe.

They were then issued with bills for up to £32,000 per flat, and told the cladding would stay up unless every resident paid their share in full.  Many residents had no spare cash – they’d either used all their savings to buy their flat, or were retired people living on pensions.  They faced the horrific prospect of living in flats they feared could burn down at any time, and which had become worthless because no one would buy a flat in a potentially dangerous block.

Steve led research to find out how flammable cladding had ended up on so many buildings.  He uncovered an intricate web of conflicts of interest that meant flammable cladding had never been banned, and Conservative Government ministers who’d refused to act despite warnings about the dangers well before Grenfell Tower went up in flames.

Armed with this information, Steve led a campaign in Parliament and across the national media demanding help for Citiscape residents.  Government ministers refused point blank to help, even though they were ultimately responsible for the flawed fire safety regulations that had allowed unsafe cladding in the first place.

Steve’s high profile campaign persuaded the building’s developers to pay £3m to have the cladding replaced.  But they pointed out the responsibility should have been taken by the Government.  Grateful residents in Citiscape have kept campaigning with Steve and others living in similar blocks elsewhere in the country for a complete ban on flammable cladding which the Conservatives have still refused to implement.